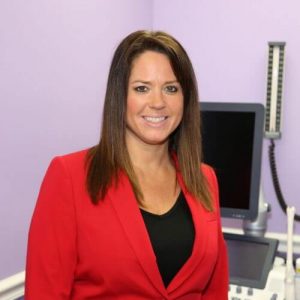 Claudine Sylvester, MD, FACOG, is a board-certified Obstetrician-Gynecologist. She received her Bachelor of Science (B.S.) degree in Zoology from The George Washington University. She then received her Doctor of Medicine degree from The George Washington University School of Medicine in Washington, D.C. She completed her residency training at Saint Barnabas Medical Center in Livingston, New Jersey.

Aside from being a senior physician of Women First Health Center, an Axia Women’s Health Care Center, Dr. Sylvester is also a full-time Attending Physician on the medical staff at Saint Barnabas Medical Center. Beginning in 2010, she began serving as the Clinical Chief of the Department of OB/GYN at St. Barnabas Medical Center. Dr. Sylvester sits on the Medical Staff Committee, the Department Advisory Committee, and the Perinatal Review Committee. She is the Chairman of the Risk Management and Protocol Committee of PHCA in Northern New Jersey.

Dr. Sylvester is the current Clinical Clerkship Director of Medical Students for the OB/GYN Department at Saint Barnabas. As such, she is an Associate Clinical Professor for the St. George University School of Medicine as well as the University of Medicine and Dentistry of New Jersey. She has been dedicated to teaching medical students and residents for over 15 years. Dr. Sylvester has received numerous teaching awards including the APGO/CREOG Excellence in Teaching award as well as the Mount Sinai Excellence in Teaching award.

Dr. Sylvester is also active in conducting research. Her work includes a randomized double-blinded placebo controlled trial of promethazine augmentation of Oxytocin in labor, for which she received the Lefkovics Resident Research Award. She has also had her work, Epilepsy in Pregnancy, published in the New Jersey Medicine Journal.

In 2011, Dr. Sylvester deservingly received the Patient Choice Award. It was also in 2011 when Dr. Sylvester became involved with LIG Global Foundation, Inc., a non-profit organization dedicated to bringing medical and non-medical volunteers to underserved populations throughout the world.

The following year, in 2012, she was named a Top Doctor in America as well as one of the World’s Leading Obstetrician/Gynecologists. Other notable awards that Dr. Sylvester has received over the years include the the Ferring Pharmaceuticals “Best PGY 2 Teaching Resident” as well as the Newark Beth Israel Humanistic Award for Patient Care.

Dr. Sylvester is a proud mother of three children. She currently resides in NJ with her husband where she is an active member of her church and enjoys spending time with her family and friends. She also enjoys running, biking, swimming, and numerous arts and crafts.