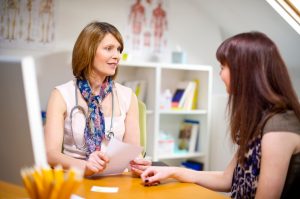 Polycystic ovarian syndrome (PCOS) is a common hormonal disorder that affects about 5 to 10 percent of all women. It is also the leading cause of infertility in women — although many people have never heard of it.

PCOS causes the ovaries to produce an excess of “male” hormones called androgens. With PCOS, the ovaries can also grow larger and form small cysts on their outer edges. All this can interfere with a woman’s menstrual cycle, which can cause infertility.

It is estimated that about half of women who have PCOS don’t know they have it. Part of the reason it’s hard to recognize and diagnose is because the primary symptoms of PCOS are quite common. They include:

Mental health can also be affected. Early in 2018, a study reported that women with PCOS are more likely to develop mental health disorders. The same study also suggests that women who have it may have a slight increased risk of giving birth to children with attention deficit hyperactivity disorder (ADHD) and autism.

No one knows exactly why some women get PCOS and others don’t. But what experts do agree on is that getting diagnosed and treated sooner rather than later is the best way to lower your chances of health problems in the future and to get relief right now.

Because PCOS can be difficult to diagnose and treat, a doctor may perform several tests or refer you to other specialists to get you the help you need. Your doctor may:

What You Can Do on Your Own

Although it is not possible to avoid developing PCOS, some experts recommend a high protein, low carb diet along with weight loss if a woman is obese.

These experts point out that obesity contributes to insulin resistance, which increases androgen, and in turn can worsen the symptoms of PCOS. For some women, even losing 10 pounds could make a significant difference in reducing or eliminating PCOS symptoms. Additionally, if a woman who is obese is having problems getting pregnant, the weight loss could help increase the chance of pregnancy.

Finally, if you think you, your daughter or another family member or friend may have PCOS, it’s better to seek out expert advice from a doctor sooner rather than later. You’ll feel better, and you’ll be proactively taking steps to stay as healthy as possible as you move towards the future.